It’s pretty thrilling when the baby starts babbling—finally, your little one is a step closer to talking! Of course, that also means the race is on between you and your partner to see which word baby says first: “mama” or “dada.” It’s unlikely that a baby is going to start saying either word right after they begin making noises. Still, it naturally raises an important question: When do babies say “mama” and “dada” anyway?

Baby’s first words are an important milestone, especially when waiting for that first real “mama” or “dada”. Find out when babies start talking and more.

Your baby’s first words are likely to happen after a few months of vocalising and verbal experimentation, from coos to growls to sing-songy combinations of vowels and consonants. But listen closely, and one day you’ll hear it: the first “real” word. By eight months, your baby will probably start stringing together “mama” and “da-da” sounds without necessarily knowing what they mean. But when those sounds start to transform into words with meaning, it’s a developmental milestone that feels like magic.

From around three months, you may not be aware, but babies are listening to you as you talk and will stare at your face as you talk. Taking all this in is how they begin “cooing” which they may do plenty of by the end of their third month.

Check our range of nursery set furniture for your baby room here.

When can I expect my baby to say their first word?

Real words can come anytime between 9 and 14 months. This isn’t the case for all babies though, some don’t say a word that is recognisable until they get to about 18 months yet others can communicate recognisable words such as ‘ba-ba’ for bye-bye, ‘da’ or ‘da-da’ for dad (or dog!) from as young as seven months. All mums want their baby’s first word to be ‘mama’ and dads are hoping for ‘da-da’, but quite often babies say ‘da-da’ first as it is a bit easier to master than the’ sound of ‘mama’. 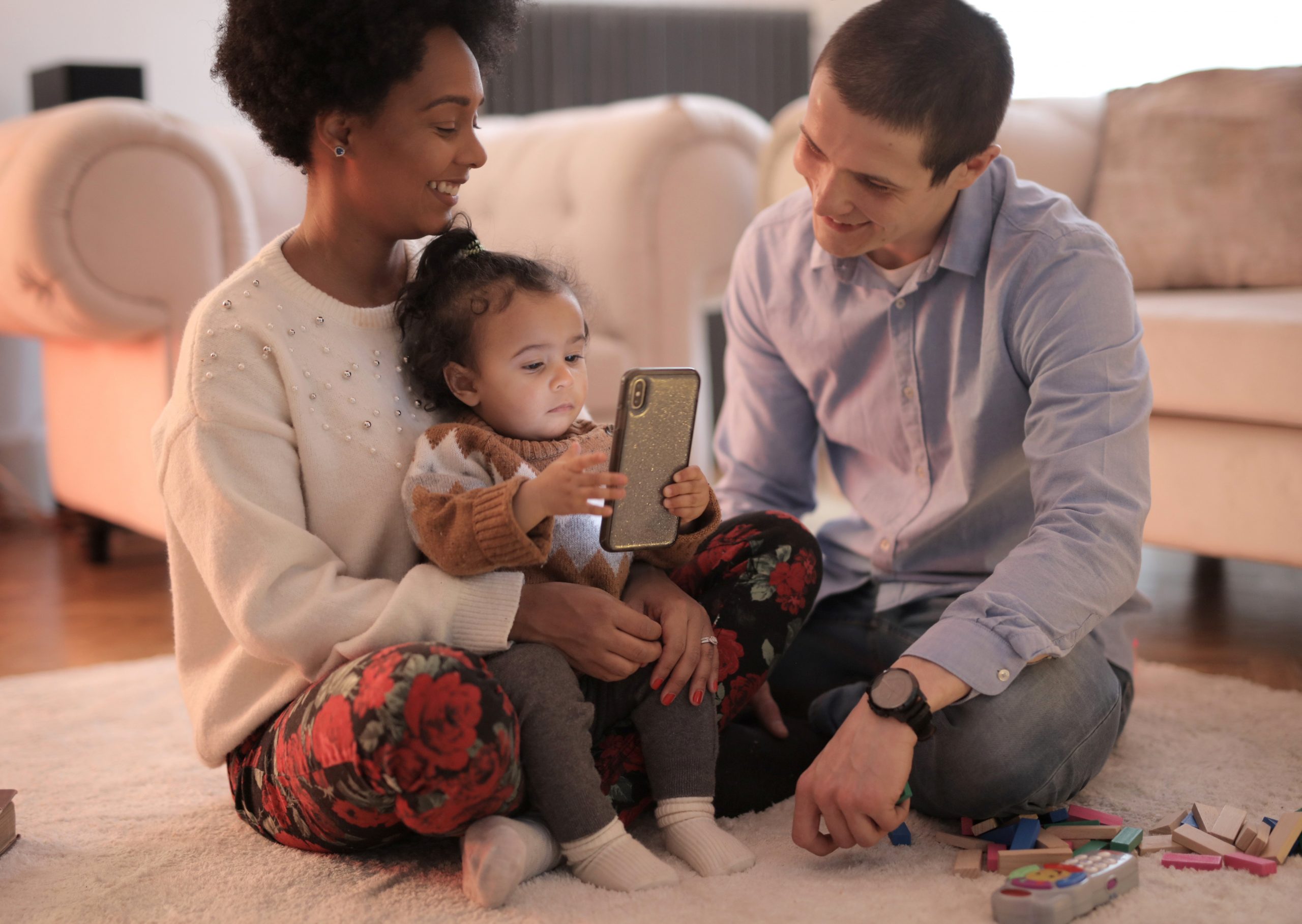 How can I encourage my baby to start talking?

The best way to help your little one get ready to start talking is to help them understand words from a young age. Babies start to absorb words you are saying form birth, so repetition will help them understand and later speak the words. Around six months old, your baby could well understand some words, like their name, and you as mum and dad too. As time goes on, your baby will start to experiment with making sounds in an attempt to copy words they have learned. All of which brings them nearer to speaking their first word.

What if my baby doesn’t show signs of talking?

Even if your little one at 18 months is only starting to attempt word sounds like ‘mi’ for milk or ‘da’ for that, don’t worry. It doesn’t suggest they are behind, and speech develops in their own time. If they are getting close to 2 years and showing no signs of trying to speak, do talk to your doctor to get some advice.

When Will You Hear Baby’s First Words?

The first “baby talk” is nonverbal and happens soon after birth. Your baby grimaces, cries, and squirms to express a range of emotions and physical needs, from fear and hunger to frustration and sensory overload. Good parents learn to listen and interpret their baby’s different cries.

When your baby will say those magical first words varies greatly from individual baby to individual baby. But if your baby misses any of the following milestones in speech development, talk to your pediatrician or family doctor about your concerns.

More ways to encourage a baby to talk:

What not to worry about

When it comes to speech, the window of what’s considered “normal” is wide open. Your child may start to use sound-words like “mi” for “milk” or “dat” for “that” (as in, “I want that!”) as early as seven months. Or your child might not start to say words or word-sounds until as late as 18 months. Believe it or not, it’s just as appropriate to hear a child’s first words at either end of that age range — or any age in between. Every child develops at his own pace.

Check out My Baby Nursery’s baby nursery sets to fit out your dream baby room.

What’s next for baby

Long before he speaks his first words, he’ll learn to understand words, but understanding concepts and directions take a little longer. Sometime around the first birthday (often before), most toddlers can begin following simple commands, but only if they’re issued one step at a time. Your toddler’s vocabulary will likely begin to explode around month 18, and he may be able to put together a sentence by age 2.

What to do if your baby doesn’t talk

You’re the best person to gauge your child’s speech development. If she shows any of the signs listed below and you feel concerned, you may want to discuss the possibility of a language delay or hearing problem with your child’s doctor.

Your child’s doctor may refer your child to a pediatric speech-language pathologist for an evaluation. (A searchable directory of certified therapists can be found on the American Speech-Language-Hearing Association’s website.)

Alternatively, your doctor’s office, daycare provider, or local school might be able to direct you to an early intervention program in your area – usually coordinated through the county or public school system – that provides free screening for language problems. Some signs to look out for:

Your baby isn’t making (or even attempting to make) any sounds or eye contact with you, doesn’t make vowel sounds (“ah,” “eh,” “oh”), doesn’t respond to her name or sounds around her at six months, doesn’t babble at nine months, or doesn’t say single words (including “mama” or “dada”) at 12 months.

Your baby doesn’t point to show things to you, doesn’t gain new words, doesn’t have at least six words by 18 months, or loses language skills she once had.

By the age of 24 months, your child doesn’t point to body parts, can’t follow simple instructions, can’t copy words and actions, or uses only single words.

By the age of 36 months, your child hasn’t started to use two- or three-word phrases doesn’t follow simple instructions, speaks incoherently, or is difficult to understand.

If your child stutters, it doesn’t necessarily signal a problem. Stuttering is a normal phase, especially when her ability to communicate is expanding so rapidly. Sometimes she’ll be so excited to tell you what’s on her mind that she can’t get the words out fast enough.

But if her stuttering continues past the age of 4, or if it’s bad enough that she tenses her jaw or grimaces in an effort to get the words out, talk with her doctor about it. Most schools will test and help to evaluate your child if stuttering persists for more than six months.

My Baby Nursery has an extensive range of baby nursery furniture sets to take the hassle out of choosing the right furniture that matches.

After your baby talks – what’s next?

As your child grows, he’ll become more of a chatterbox. There might be moments when you long for those peaceful days of speechlessness, but for the most part, you’ll delight in his play-by-play of what happened at preschool, what he thinks about dinosaurs and his descriptions of what his best friend likes to eat.

By age 4, your child can speak in sentences of five or six words. He’ll begin to understand and use some of the basic rules of grammar.

He’ll tell stories and speak well enough for strangers to understand him. He’ll also know his first and last name. Oh, and get ready for every “why” question under the sun.

At about nine months old, your baby’s babbling is probably starting to sound more like real words. For example, she may say “mama” and “dada”.

Don’t get too excited just yet, though, as she probably doesn’t connect the sounds “mama” and “dada” with mum and dad at this age. They are just a couple of the many sounds she’s trying out as she finds her voice.

You can help your little one at this early stage by talking to her clearly and often. The conversations may seem one-way at first, but your baby will soon catch up and gurgle or laugh and smile in response.

Explore your baby’s world with her, pointing out interesting things on walks and outings. Switching off unnecessary background noise such as the TV and radio can make it easier for her to hear and understand you.

By the time your baby is 12 months old, she will probably use the words “mama” and “dada” and know exactly what she’s saying. However, she may also still babble short sentences that sound like she’s fluent in a foreign language!

Reading to your toddler, describing what you’re doing around the house and asking her lots of questions will all help to develop her vocabulary. Don’t be tempted to correct her early pronunciation of words but do repeat them back to her clearly so she can learn from you.

Between 12 months and 18 months, your child will take more of an interest in words. She will have a vocabulary of between six and 20 words, although she will understand many more.

By the time your child is two, she may know as many as 200 words (although she may only use around 50 of these). She may also be able to form two-to three-word sentences.

Nursery rhymes, songs and simple games like “Simon says” can help your child learn to formulate simple sentences and understand how to take turns in conversation. She’s also discovering that learning to talk is fun!

By the time your child turns three, she will be a more sophisticated talker. Her words will be easier to understand, and she will be able to have a longer conversation with you.

Bear in mind that babies develop differently, some more quickly than others. If you’re concerned about your baby’s development, talk to your GP or health visitor.

While it may start with Dada, the pronouncement of “I” is indicative of a psychological self-being born. For the next two to three years, the “I” will continue to develop as a child makes sense of their world and discovers their own words and meanings for it. It takes time to grow a separate self, and this should be a child’s main preoccupation between the years of 3 to 6 years, thus giving them the appearance of self-absorption. The child needs time to develop as a whole person, and this is achieved with a focus on the self as governed by instincts, emotions, and brain development that is underway.

Between the age of 5 to 7 years, brain growth should ideally allow a child to consider two separate reference points at the same time. This means they will be able to take into account their own needs, as well as those of others while interacting with them. The “I” can now shift to “WE”, and the young child starts to evolve as a social being. At this time, they should be able to handle themself better in social settings and are more likely to meet social expectations for conduct and performance.

The birth of a child as a social being rests on how they unfold first as a separate self. Those magical words at around age 3 – “I DO,” indicates things are well underway. While Dada is the first person a baby usually identifies in their life, it is only just the beginning. It is the start of a journey to understand who they are and to be able to use their words to share their experiences with others.