In 1992 the (AAP) recommended that all infants be placed on their backs for sleep, which dramatically reduced the occurrence of Sudden Infant Death Syndrome (SIDS).

The AAP continues to publish guidelines to address safe sleep concerns for infants through age 1 to lower the risk of SIDS, suffocation or entrapment. Familiarising yourself with these guidelines will help to keep your baby safe and happy, not to mention give you greater peace of mind:

Knowing about safe sleeping positions for babies is important in ensuring a safe sleep environment and preventing the risk of sudden infant death syndrome (SIDS).

SIDS falls under the category of sudden unexpected death in infancy (SUDI) and is majorly linked to the position in which the baby sleeps. Thus, knowing what positions are safe for your baby to sleep in is important to help prevent unexpected situations.

Also, knowing a few tips that will help reduce the risk of SIDS helps go a long way. One example of such a position of safe sleeping in babies is the supine position, in which the baby, who is less than a year old, is made to sleep on their back. Read on to know more about safe sleeping positions for babies and tips on sleep safety?

Is It Ok For A Newborn To Sleep Head To The Side?

Most parents know that the safest way to put their baby to sleep is on its back. Babies who sleep on their backs are much less likely to die of sudden infant death syndrome (SIDS). Babies who always sleep with their heads to the same side can develop flat spots.

Why Shouldn't Babies Sleep On Their Side?

The main risk of putting a baby to sleep on their side is falling onto their stomach. When a baby is too young to support their head, this may mean that their face becomes stuck against the mattress, making it hard to breathe. Most babies can fully support and lift the head by four months.

At What Age Can Babies Sleep On Their Stomachs?

Your baby should not sleep on their stomach until one year old. They should always be placed on their back to sleep during the first 12 months to ensure a safe sleeping position.

Although sleeping positions can cause a misshapen head to develop in little ones, some good practices can be adopted by parents to reduce the likelihood of a flattening development. These methods can also help a flattening improve if it has already developed.

What To Do If The Baby Sleeps Face Down?

You can try to turn her face if you see her face down, but often, like rolling a tummy, babies will go back to the position of comfort. Always place the baby on its back to sleep. Increasing tummy time when awake is also helpful. If you are still wrapping her, this needs to be ceased - she needs her arms free.

Why Sleeping on the Back Is Safest for Babies 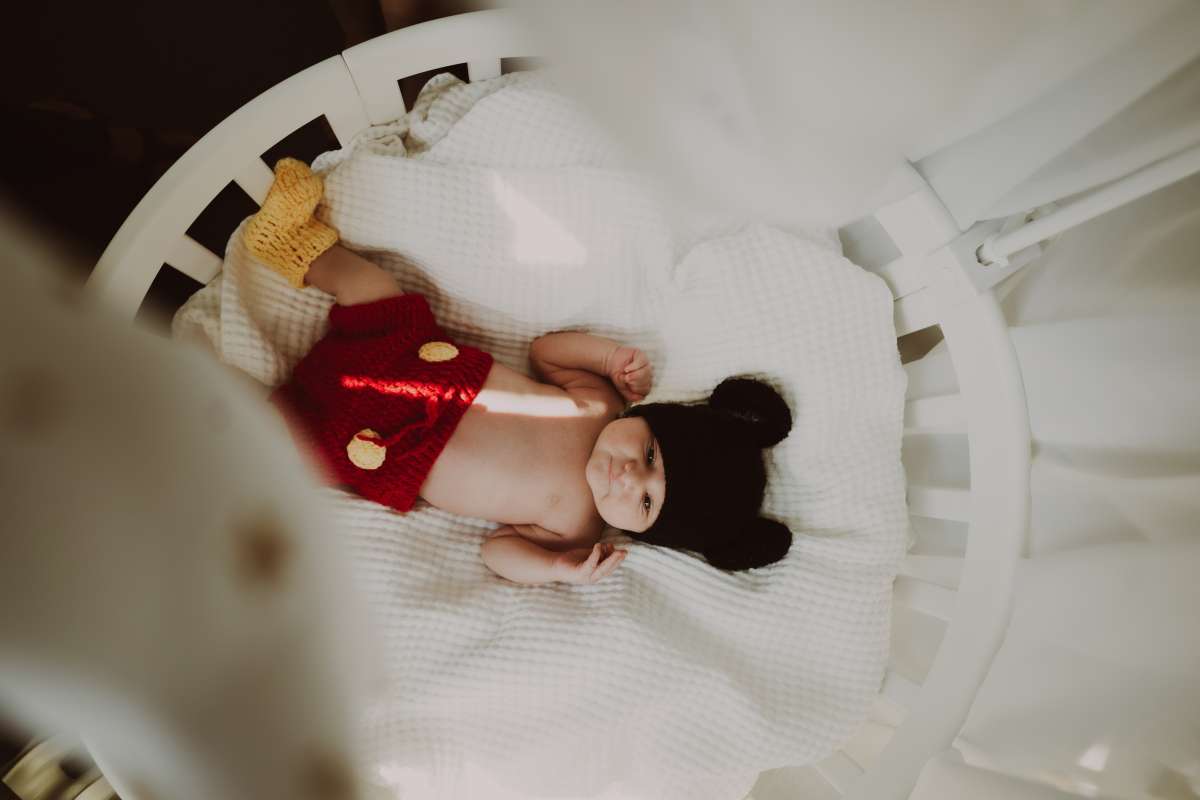 While research is still underway, studies suggest that babies get less oxygen and get rid of less carbon dioxide when they sleep on their bellies. In other words, while on their stomachs, an infant can only re-breath air from a small pocket of bedding pulled up around the nose.

Other findings point out that many babies who die from SIDS have underdeveloped regions of their brain, perhaps areas that prevent them from waking up to remove themselves from danger (like suffocation). And since it's impossible to figure out which babies won't arouse normally, it's better to be safe than sorry.

Since 1992, when the AAP began recommending that all newborn babies (from birth to age 1) be put to sleep on their backs, during naps, and at nighttime, the annual SIDS rate has declined more than 50 per cent. And there's been no increase in choking or aspiration since that time.

Sleep Habits to Reduce the Risk of SIDS

In addition to following the AAP's recommendation for baby sleeping positions, you can protect your infant from SIDS by following these simple sleep safety tips:

For healthy babies under one year of age, sleeping on the back is the ideal position. However, some extra measures would be helpful to ensure safe sleep for your baby.

The Good And Bad Positions For A Baby To Sleep 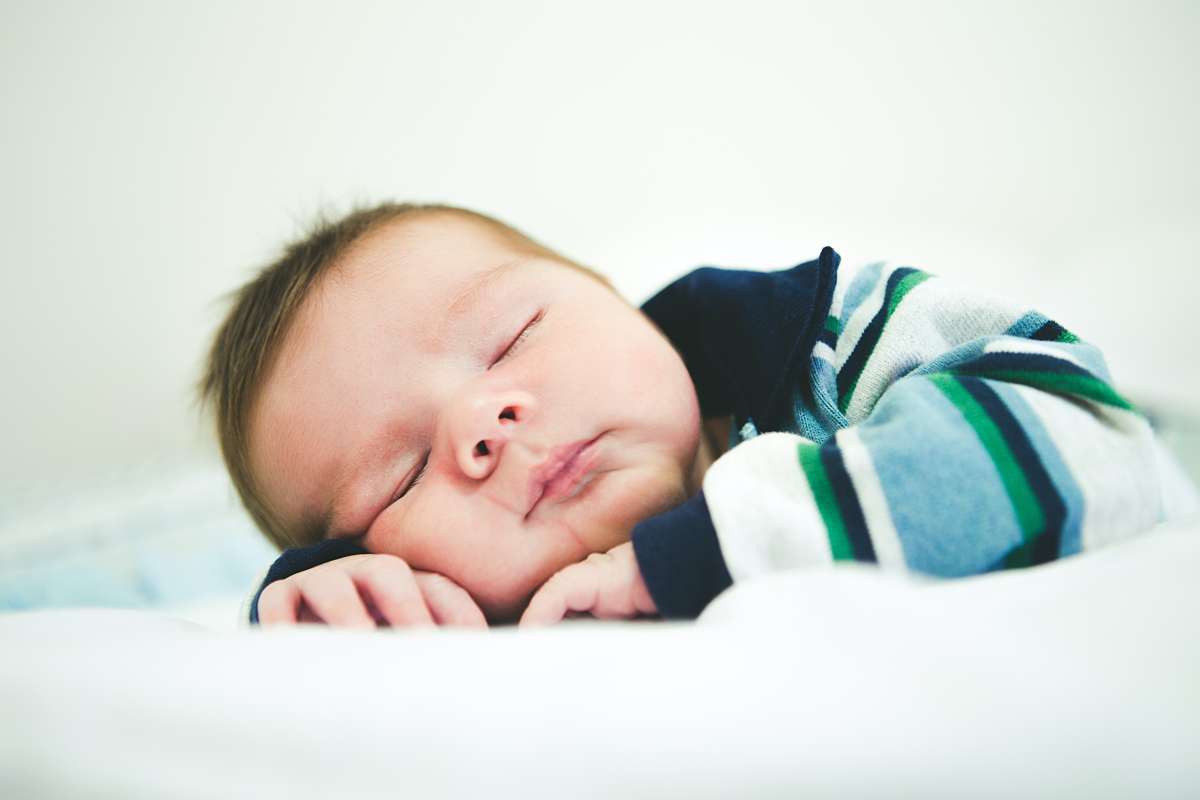 It is essential to learn about safe and unsafe sleeping positions to deal with the above risks.

Healthy babies born full-term should be placed on their backs for naps, short rest periods, and sleep at night.

Risks Involved In ‘Sleep On Back’ Position

If infants are placed on the back for a long time, it may lead to ‘positional plagiocephaly,’ a case of flattened or distorted head and ‘brachycephaly,’ the flattening of the back the skull.

The shape will become normal by the time they turn one year and rarely requires any treatment. Simple repositioning techniques may be employed to avoid such conditions. They include:

Several theories discourage parents from making a baby sleep on the stomach because:

When Can Babies Sleep On Stomach?

In rare cases, due to a medical condition, doctors may advise parents to make the baby sleep on the stomach rather than the back.

The sleep-on-stomach position for babies is highly unsafe for the following reasons:

Sometimes, in case of certain medical conditions, doctors may advise parents to put the baby in the sleep-on-stomach position. Usually, children with gastroesophageal reflux or certain upper-airway malformations like Pierre Robin Syndrome are advised to sleep in this position, but it may not work. Hence, it is advisable to consult the physician properly before putting the baby to sleep on his stomach.

Sleep On The Side

It is unsafe for babies to sleep on the side because they may end up on the tummy, increasing the risk of SIDS.

In addition to the good and bad sleeping positions, you must also know about the sleeping practices that could lead to sudden unexpected death in infants.

Sleeping on the side is not a recommended infant sleeping position, as infants tend to roll onto their tummy while asleep eventually. This increases the risk of SIDS due to one of the reasons mentioned above.

So then, which sleeping position is good for your baby? Well, the only option remaining now is the sleep-on-back position. Let’s take a closer look at it.

Risks Involved In The Sleep-On-Back Position

But, these are temporary conditions that normalise as soon as the baby turns one. There are some techniques that you can use to avoid these conditions altogether –

These techniques allow the baby to lie down in different positions instead of lying down on the back.

There are a few more things you can follow to ensure your baby sleeps safely. The tips provided below will help you manage or correct your baby’s sleep positions.

Getting your newborn in the habit of falling asleep on his back may seem near impossible, as many babies seem to fall asleep better on their stomach or side, especially when curled up on a parent's or caregiver's chest.

Rest assured, however, that in time your infant will get used to this safe baby sleeping position. Of course, once your child can roll over, he may reposition himself.